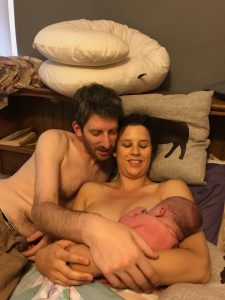 On the evening of August 27, 2018, I was 37 weeks + 2 days pregnant. I wasn’t quite ready to have the baby. My mom hadn’t arrived from Toronto to be with me during labor, birth, and beyond. My partner, Joel, hadn’t moved the baby’s dresser downstairs from the attic, or set up the co-sleeper beside our bed, or installed the car seat. Joel and I hadn’t re-read our favorite birth book, The Birth Partner by Penny Simkin

I went to bed around 9pm and noticed that the Braxton-Hicks contractions that I’d been experiencing since around 30 weeks were happening frequently. I was tossing and turning and couldn’t get to sleep, though this had become a familiar occurrence in late pregnancy. I moved out to the sofa around midnight so Joel could sleep without my tossing and turning.

At around 1am, I got up to pee and felt something slide out of me. I turned on the lamp and it was a blood clot, larger than a quarter in diameter. As I walked to the bedroom to wake up Joel, I noticed I was dripping fluid tinged with pink.

I informed Joel that I thought my water was breaking and he responded, “Really?” and continued to sleep. But not for long! I told him to get up. I wanted him to call one of our midwives but he wanted to time some contractions first. They no longer felt like Braxton-Hicks; they were much stronger and I got down on the ground on my hands and knees. After a few contractions I decided a distraction would be nice and we embarked on a walk with our dog, Roshi.

When a contraction came on, it required most of my focus. I stood still and bent halfway forward with my hands on my thighs during them. After about fifteen minutes of walking and breaking for contractions, I convinced Joel to call our midwife, Silke. She said to call her when we got to 4-1-1 with the contractions (four minutes or less apart; one minute or more in length; for one hour or more). She was glad we were out for a walk, but also suggested that we go home and try to sleep, or at least Joel could sleep and I could try a bath.

We came home and did just that. Joel drew me a bath, I got in, and he went to sleep. I labored in the tub for about an hour. Then I came to the sofa and labored some more. They felt quite intense and I began moaning and letting out a holler during contractions. In between I would fall halfway asleep, and wake up to the very beginning of another contraction. I found a website that helped time the length of contractions and the time in between contractions. Eventually, around 6am, my contractions were 4-1-1.

I woke up Joel and he called Silke. She said the other midwife and the apprentice midwife (both of whom had attended our prenatal appointments) would be over within an hour, and she would follow shortly after.

I asked Joel to draw me a fresh bath and I was in the tub when the two midwives, Kim and Caley, arrived. I was extremely inwardly focused and was not interested in connecting with Joel or my midwives. Eventually I got out of the tub and had my cervix checked. Kim said I was at least 6cm. I labored on the floor on hands and knees (on my dog’s bed!) and with my knees on the floor and my upper body resting over my bed, for a while. Then I got in the big birth tub that Kim and Caley had brought and set up.

At one point, Silke encouraged me by saying how well I seemed to be coping with contractions. She added that I could let her know if talking wasn’t helpful. I responded, “I don’t think talking is helpful.” Out with manners! Every time Joel would touch me, I would say, “No touch.” At this point, expressing a complete sentence was a waste of energy. I was resting and sometimes dozing in between contractions. At one point I found myself in agony and fear, and I looked around the room. I saw Joel and Kim talking quietly in the other room. Silke was sitting near the tub and I think she gave me a soft smile. During prenatal yoga class, Carol had reminded us many times to bring four things to our birth: great faith, great doubt, great determination, and great love. This was my favorite thing to have learned in prenatal yoga, and I had been reminding myself of these four assets all throughout pregnancy. I realized I was in a moment of great doubt. Giving birth is hard! I remembered that all was normal.

Silke asked me to get out of the tub to see what gravity could do for me, and so she could do another check of my cervix. I didn’t want to move and it took me about fifteen minutes to make my way out of the tub. Staying mostly still felt better than moving. Silke said she would like to keep her fingers inserted through a contraction so she could be certain of what was going on. I was extremely resistant to this idea. She told me she thought it would really help, and asked why I didn’t want it. I said that I didn’t want it to hurt more than it already did. She said that she was going to be honest and tell me something I didn’t want to hear: it was going to hurt more before I would have my baby, but then it wouldn’t hurt anymore, and I’d be able to sleep. She was right, I didn’t want to hear it, but on the other hand I felt a little more prepared.

Eventually I agreed to the cervix check. When she was done she announced that I was fully dilated and ready to push. I responded that I didn’t want to push! Finally I agreed that I would have to try to push this baby out. I didn’t think I knew how to push and I wasn’t getting an urge, so I sat on the toilet and Silke put a finger in me and told me to press into it. It was exactly like pushing poop. I sat and pushed on the toilet for a while. Then I moved to my living room, just inside the threshold of my front door. I got down on hands and knees and pushed for a while. At one point I said I couldn’t do it, and Joel said, “You ARE DOING it!” I could hear his excitement. I asked if I could change positions and Silke said that sounded great and asked what position I was thinking of. I said the side lying malasana (side lying squat). She liked that idea and I moved into it and resumed pushing. Silke would coach me on every push, and sometimes Kim or Silke would coach me between pushes. I didn’t like pushing and was resisting going into the pain, so I needed to hear, “Push more, Push even more, Bring your baby down, Bring your baby down even more, Keep bringing your baby down, Don’t let your baby slide back up, Keep your baby down, Can you push even a little more, Even more,Let your baby fill your vagina, Let your vagina expand.” My midwives were calm but firm.

They asked if I would like to feel the baby as the head was so close. I recoiled in fear and said no, but Silke said she thought it would help me to feel how close my baby was to being out, so I felt. Baby was right there, mere centimeters away! Somebody asked if I’d like to look in the mirror. I again recoiled in revulsion and said no, and this time we left it at that.

Eventually they said I was really close to getting the whole head out. I asked if they thought it would be the next contraction, and Silke responded probably not, but maybe in a few more. On the next contraction I pushed, kept pushing, pushed even more, and brought my baby’s whole head out. (I found out after the birth that my baby’s little paw and a part of the cord also came out with her head.) A few more contractions went by. Then Silke said I would have to really try to bring my baby all the way out as soon as possible. On the next contraction, just like before when I brought the head out, I pushed and kept pushing, pushed even more, kept on pushing, and eventually I felt my baby’s whole body slither and slide out. I did it! I’d had my baby! I lay back and cried with all the emotions in the universe. All the fear, all the pain, all the joy and love and determination and trust and knowledge and uncertainty and effort I had brought to this process. I had succeeded! I had had my baby! This moment of crying was purely for myself, pure self-devotion, self-love, pure respect for my process.

Then I sat up and lifted my baby off the little medical pads she had been placed on to await me. I held her to my body and lay back down in complete awe and appreciation. She was my baby, she was perfect, and I was completely transformed into a mama.

Any cookies that may not be particularly necessary for the website to function and is used specifically to collect user personal data via analytics, ads, other embedded contents are termed as non-necessary cookies. It is mandatory to procure user consent prior to running these cookies on your website.