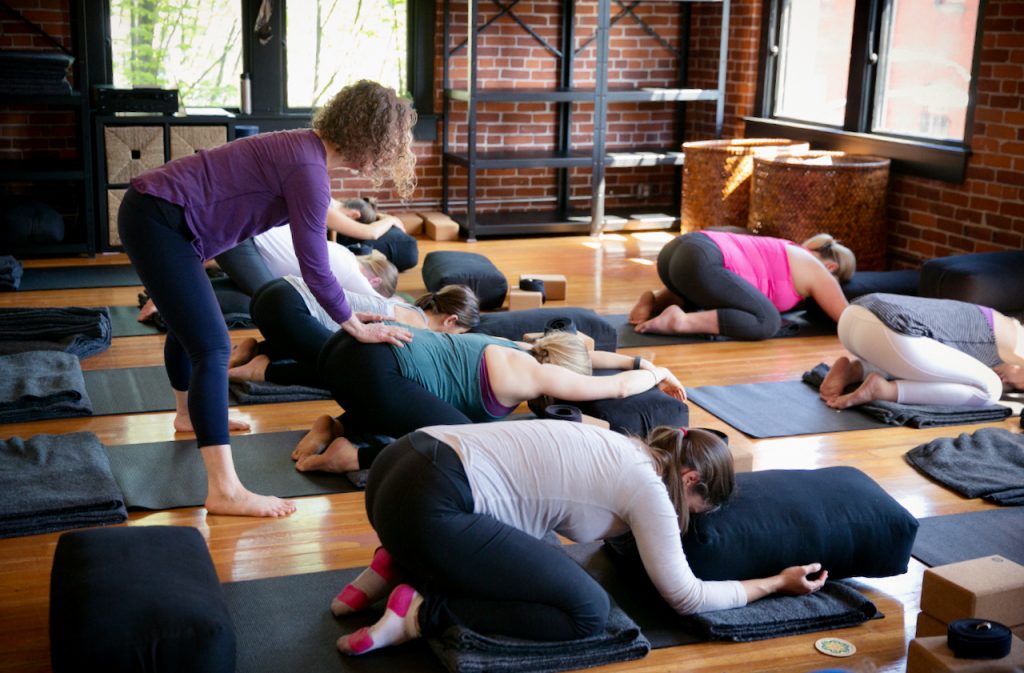 I didn’t take prenatal yoga classes during my first pregnancy in 1973. My baby was occiput posterior. I had a six-hour labor (fast – considering my status as a first-timer and my baby’s less-than-ideal position). The birth was hard on both of us, though. Very hard. I breastfed him for a year (an amazing thing in the 70’s). The first three months of breastfeeding were incredibly painful for me. At first, he was very slow to gain weight. It seemed like he cried inconsolably almost all the time for the first four months or so. We carried him constantly.

My second baby in 1976 also came fast. Very fast. The whole thing took an hour and 20 minutes from start to finish. He was obviously in an ideal position for birth. I didn’t take prenatal yoga classes during that pregnancy either. I did, however, faithfully do cat/cow and other yoga poses every night before getting into bed. My goal was to encourage my baby to get into an ideal position. I think it worked. That birth was easy for both of us. He was an easy-going baby. We had no feeding problems. He gained weight quickly and weaned himself at 2.5 years (also, an amazing thing in the 70’s).

I began trying in-person yoga classes and following televised yoga classes in 1976 when my second child was still an infant. I have practiced yoga off and on (mostly on) ever since then.

MY EXPERIENCE AS A BIRTH WORKER AND A BODYWORKER

My children were still little when I began helping friends and family members give birth. Labor support wasn’t a formal occupation in those days.

Around 1990, when I began practicing therapeutic massage, my clients tended to be pregnant people. I worked with them during their pregnancies and some of them asked me to provide labor support. The term “doula” had not yet been coined to describe this work. I told people that I was a massage therapist who also went to births – a rather bulky title…

Over the years, doula work lead to midwifery work, massage lead to Craniosacral Therapy (CST) and yoga lead to more yoga. For the last 28+ years I have been developing and teaching CST techniques for infants and specifically for pregnant people to help their babies find good positions for continued gestation and birth. This is called Optimal Fetal Positioning. I’ve devoted my entire career to helping babies and their families.

AN IDEA WAS BORN

Side note: Kara, my cousin’s wife, later became pregnant and attended the very first prenatal yoga class (and many more) that I ever taught at MamaSpace Yoga.

In May 2016 I rented a big studio in Portland Oregon’s Pearl District. It was across the hall from where I had been practicing bodywork and teaching CST workshops. I would easily be able to move furniture around a little bit and make room to teach prenatal yoga classes in the new space. It was perfect! MamaSpace Yoga and the MamaSpace Yoga Method were officially born. As a gift to the community I taught free fertility and prenatal yoga classes there for 2.5 years. In late 2018 I decided to move my bodywork practice and CST classes elsewhere and expand the MamaSpace Yoga studio offerings to include a wider variety of fertility, prenatal and postpartum yoga classes and special events for growing families. I hired the best prenatal and postpartum yoga teachers in Portland to help. MamaSpace Yoga was re-born as a “for-real” perinatal yoga studio. At our peak we were offering (along with special events) 16 classes every week.

The pandemic has changed the way we do things at MamaSpace Yoga. We stopped teaching in-person classes in March 2020. I’ve learned how to be a videographer, a video editor and a person who teaches yoga classes to a camera. I also teach others how to teach to a camera. I rehired most of my former employees – plus a few more. Together, we have been steadily creating a library of online on-demand fertility, prenatal and postpartum yoga classes. I had always planned to grow MamaSpace Yoga into a studio that had an online video component – just not instantly and exclusively. As it tuned out, it was almost instant and for now it’s all we do!

THE FUTURE IS BRIGHT

We are forging ahead as an online studio. I do look forward to the time when it will be safe for us to practice yoga together in the same room. When it is, we will re-open for in-person yoga classes. I really miss the community. I know everyone does. We’ll still make perinatal yoga videos. Some of our in-person prenatal and postpartum yoga classes will be videoed for later viewing.

I’m deeply grateful to all the pre-pregnant, pregnant and postpartum people who have practiced (and continue to practice) fertility, prenatal and postpartum yoga with us at MamaSpace Yoga. It is a great honor to serve you on your parenthood journey.