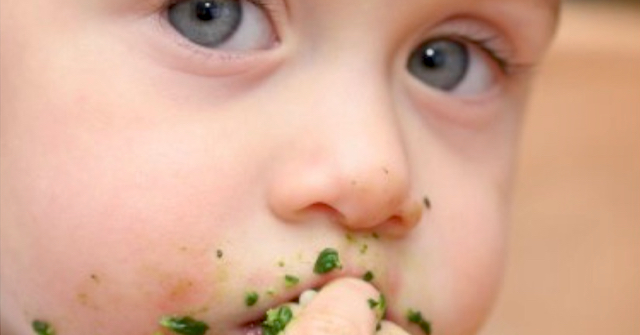 Parents ask me about solid food introduction all the time. Here’s my take on it.

Babies store iron in their bodies while they gestate. Milk has next to no iron in it. At some point after birth, babies’ iron stores begin to diminish. This is often when they show signs of interest in iron-rich solid food. Hopefully, this occurs around the time they are developmentally ready in other ways. Unfortunately, some babies have their cords clamped and cut too soon after birth and don’t get all of their own iron-rich blood – some of which remains in the placenta or umbilical cord. This can lead to anemia down the road or a premature necessity for solids or supplements before the baby is otherwise ready.

How Will I know If My Baby Is Ready For Solids?

What are the readiness signs? If we sat on the floor and ate with our hands the readiness signs would be obvious. A ready baby would simply join in the family fare. The baby would be able to sit stably. They would probably (but not always) have some teeth. They would be interested in eating food. The interest thing is most important. We need to trust babies to know when they are ready. The ready baby would pick up pieces of food, put them in their mouth, gum, chew or mash them up and swallow them. I believe that when babies can do these things they are ready.

I am against poking rice cereal or other pureed concoctions into babies’ mouths with little spoons. Normal babies don’t really need “baby food”. We don’t need to buy it and we don’t need to make it. Babies can eat what we eat. We might need to mash their food with a fork or cut it into pieces, but if they are really ready for solids that’s pretty much all we need to do. * Note: Obviously, there are some exceptions like whole nuts, honey, raw eggs, and other foods that pose safety hazards.

Back In The Day

When my kids were babies (in the 70’s) the recommended practice was to formula feed and then begin solids in the form of rice cereal at six weeks. Then we were supposed to feed applesauce, pureed carrots, pureed bananas and the like. The idea was that formula was deficient in certain nutrients and early supplementation with solids would somehow make up for it. The myth that babies on solids would sleep better or longer was rampant (and persists today). It’s a myth. Some people (back in the day) would cut the end of a baby bottle nipple to make a big hole so a little baby could suck out a rice cereal and formula slurry. Eeeew!

For some reason I never followed those instructions. I must have read some radical article about the “late” introduction of solids and stuck with it. I breastfed my children, but hardly anyone else did in the US in those days. I tried feeding solids to Jason, my oldest son, at age six months with a spoon. He wanted to feed himself with his hands. So I let him.

Jason’s younger brother, Adam (also known in our family as “The Breastfeeding Expert”), didn’t eat any solid food until around his first birthday. When he could sit on his own, we dutifully placed him in a high chair at the table with the rest of us during mealtimes. We offered him little pieces of food which he enjoyed feeding to the dog. His first solid food ended up being guacamole. He ate a lot. After that he ate most everything we ate. It happened all at once. That was it.

Just Say No to Squeeze Tubes

In recent years squeeze tubes with pureed “snacks” have appeared on grocery store shelves. Babies suck the pureed contents out of these tubes. They appeal to parents because they reduce mess and babies can manage them on their own. Unfortunately, they also can adversely affect normal oral development.

The normal resting position for a human tongue is on the hard palate (the roof of the mouth). A normal hard palate has a gentle, broad arch. This broad arch shape develops from applied tongue pressure. When babies breastfeed they open their mouths wide to accept the nipple and then — with their mouths still wide-open — elevate their tongues and press the yielding maternal nipple into their hard palates.

Some babies don’t have the ability to move their tongues normally and apply that even pressure on the hard palate. This may be due to tongue tie, a torsion pattern that extends into the floor of the mouth or cranial nerve dysfunction. I wrote about torsion patterns and cranial nerve dysfunction here. Without that pressure, the hard palate grows into a narrow, high arch. If you look at a face you’ll notice that the roof of the mouth is also the floor of the nasal cavity. When the hard palate develops a high arch it steals space from the nasal cavity. This adversely affects airway development and causes problems like sleep apnea and sinus issues later on. Trust me. It’s a problem.

Now, back to the squeezy sucking pouches and tubes. Babies who can manipulate them are ready to begin squishing avocados and bananas and steamed sweet potatoes into their hard palates with their own tongues. These activities are the foundation of normal hard palate and oral function development. It could also save you a few bucks on orthodontia later. So ditch the squeeze tubes.

Does Your Baby Want a Spoon?

Babies will show interest in spoons and other utensils when they are ready. My philosophy is that if the baby wants a spoon the baby gets a spoon. Sometimes babies want certain utensils before they are ready. One of my granddaughters was especially interested in using a knife since before age two. Luckily, she lived with adults who could safely cut her food for her. Now she’s in high school and, among other acts of independence, cuts her own food.

I do think it makes sense to introduce new foods singly and, in some cases, in a particular order, especially if there are food allergies in the family. That way we know which food is the culprit if the baby has a reaction. Sometimes that doesn’t always go according to plan. One of my granddaughters got the food urge on vacation in Europe at age five months. She grabbed and tried to eat everything she could snag off our plates. She had many multi-ingredient new foods that were not necessarily on her parents’ list of what to introduce first. Seriously, who would willingly go to Italy and not eat in restaurants?

How to Do Self-Feeding With No Mess

You can’t. Self-feeding can be a bit messy. Use a bib. Put plastic under the baby’s chair. A shower curtain works great. Get over the idea of white carpeting in the dining room until the kids are grown. Kids spill. So do adults. In my family we always employed dogs as part of the self-feeding team. The floor can stay pretty clean with the right dog on duty. It’s normal for kids to smear food on their…[any part that’s not the mouth]. It’s actually part of body mapping — a process where babies learn the physical boundaries of their bodies. Again, it’s messy — and normal.

…and other ridiculous things we do to get children to take one more spoonful of food. Self-feeding eliminates what I think is the weirdest part of spoon-feeding. When we spoon feed our babies they have to eat in order to please us. When parents feed pureed food from a jar, they are inclined to coax the baby to eat just a couple more mouthfuls if the jar is almost empty. I would rather kids eat for healthier reasons.